How can we solve the energy trilemma?

"There is now an opportunity to couple all energy sectors by converting excess electricity supply to hydrogen for non-power applications. Through this sector coupling, we can ensure the security and affordability of our energy."

The UK government has committed to a clean energy system revolution through the Climate Change Act 2008, which sets out the goal of 80 per cent in CO2 reductions by 2050 from 1990 levels. Achieving this goal, while simultaneously enabling energy security and universal access to affordable energy, is a formidable challenge for government, industry, and academia. The Hydrogen and Fuel Cell SUPERGEN Hub, funded by the Research Council’s UK Energy Programme, works with prominent academics and key industry experts to develop the hydrogen and fuel cell technologies that can support a cost-effective transition to a secure and environmentally sustainable energy system. The Hub’s work is not limited to research – it undertakes targeted analysis to inform key stakeholders, and especially policymakers, of the role that hydrogen and fuel cell technologies can play in addressing the energy trilemma (security, cost and environmental sustainability).

Hydrogen and fuel cell technologies are gaining increased attention from global policy and industry actors. The Hub’s energy systems modelling work, outlined in the white paper titled The Role of Hydrogen and Fuel Cells in Future Energy Systems, sets out that “both hydrogen and fuel cells form part of the least-cost solution to decarbonising the UK economy out to 2050.” Even without government intervention, such technologies “offer the best value route to decarbonising heavy goods vehicles, some industries and peak power generation.”

Heat demand peaks in winter and troughs in summer, while electricity demand varies only slightly with the seasons (see Figure 1). The Hub’s modelling work shows that it is significantly cheaper to utilise the existing gas grid than to make additional investment in building new power stations and electricity infrastructure to meet the high peak heat demand with electricity. Battery storage currently costs over $200/kWh, but even at the “holy grail” target cost of $100/kWh, batteries will be more expensive than gas storage in salt caverns or depleted oil wells (needing less than €8/kWh to develop) and short-term storage of hydrogen in the gas grid is estimated to be even cheaper. 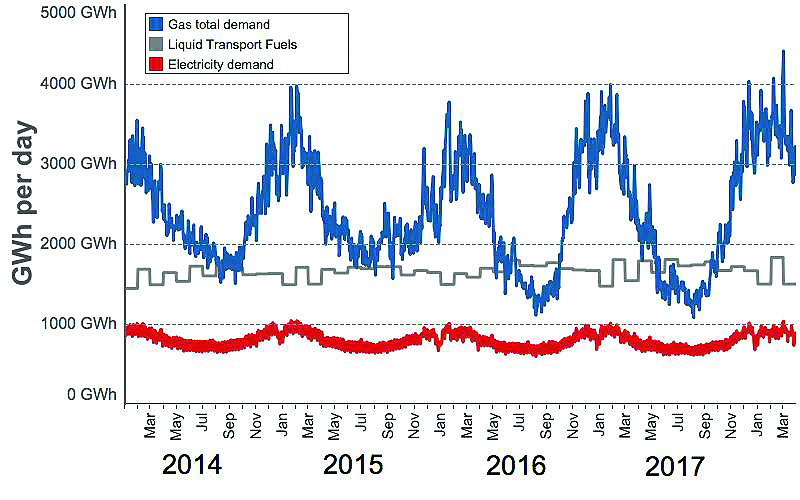 Renewables are becoming an increasing source of electricity, but because Britain’s electricity network cannot tolerate excess power when energy supply is greater than demand, it is sometimes necessary to curtail renewable generation. Last year, wind farms were paid over £100m to switch off their turbines. This would not happen if the UK had energy storage to balance supply and demand. While batteries, demand-side response, and interconnectors can help to manage short-term supply and demand dynamics, the UK needs a solution that stores and then releases large volumes of energy when needed at reasonable cost.

Fuel cell vehicles have a longer driving range and significantly shorter refuelling time than premium electric vehicles, and are more advantageous as buses, heavy goods, and other highly utilised vehicles. Like battery electric vehicles, fuel cell electric vehicles also improve urban air quality by producing zero local exhaust emissions. Furthermore, macro-economic analysis in the Hub’s white paper: The Economic Impact of Hydrogen and Fuel Cells in the UK, shows that “a significant move away from current UK use of refined fuels in private transport towards hydrogen can yield a valuable increase in GDP.”

Hydrogen can be produced from a broad range of feedstocks, including natural gas and water, using different production processes, such as reformation of methane and electrolysis with renewable electricity. Thus, any volatility in prices of primary energy sources or supply disruptions can be ameliorated by switching between sources.

The Hub’s white paper The Role of Hydrogen and Fuel Cells in delivering Energy Security for the UK shows that “building a diverse portfolio of hydrogen production plants, using a range of feedstocks, and would cost little more than building only the cheapest plant.” Furthermore, using fuel cells that can operate on hydrogen and other fuels can enable a high degree of flexibility. In the longer term, fuel cell electric vehicles could greatly reduce oil dependence in the transport sector and fuel cell micro-CHP could reduce gas consumption by generating electricity and heat at high overall efficiencies.

Despite the industry-led market introduction of fuel cell technologies, their costs are currently too high for most consumers. The steep cost reductions seen for fuel cells in Asia suggest that programmes to support research, development, and deployment can improve the economic viability of hydrogen technologies. Japan’s Hydrogen and Fuel Cell Roadmap, the US DOE Hydrogen and Fuel Cells Program, and Europe’s Fuel Cells and Hydrogen Joint Undertaking are prominent examples. The UK government expects to invest around £841m by 2021 in innovation in low-carbon transport technology and fuels, of which £246m was recently provided for the development and manufacture of electric batteries.

There is now an opportunity to couple all energy sectors by converting excess electricity supply to hydrogen for non-power applications (heat, transport and industrial processes), as demonstrated in Figure 2. Through this sector coupling, we can ensure the security and affordability of our energy. 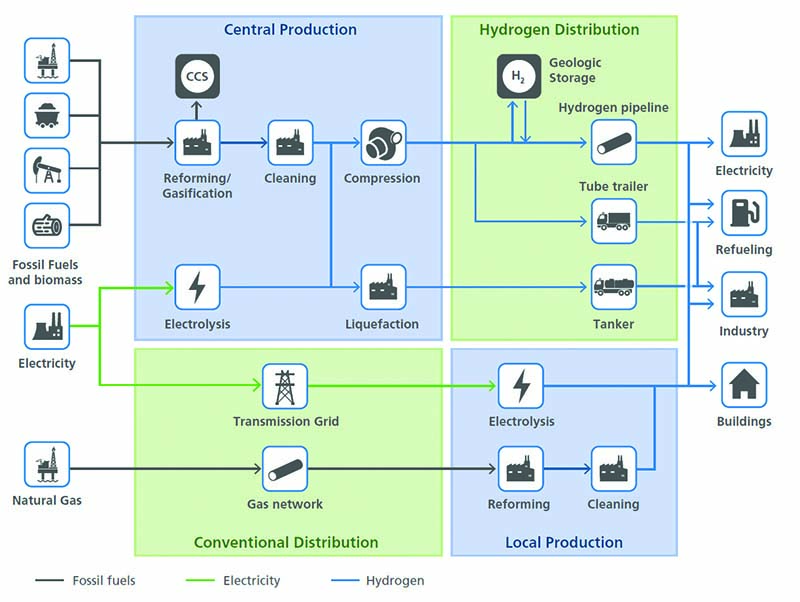 Figure 2: Hydrogen delivery pathways presented in the white paper: The Role of Hydrogen and Fuel Cells in Future Energy Systems.

Article originally appeared in the 15th June edition of the New Statesman.

How hydrogen represents a necessity and an opportunity