Johnson Matthey (JM) has today announced that Robert MacLeod has advised the Board of his intention to retire as Chief Executive, and is pleased to announce that Liam Condon will succeed him.

After nearly eight years as Chief Executive, Robert will step down from that role and from the Board on 1st March 2022, but will stay on to support the transition process until the Company’s Annual General Meeting on 21st July 2022 when he will then retire from JM.

Liam Condon, who will join JM as Chief Executive on 1st March 2022, is currently a Member of the Board of Management of Bayer AG and President of the Crop Science Division, a role he has held for nine years. Bayer Crop Science is the global leader in agricultural innovation and sustainability with circa €20 billion revenue. He has served in senior roles at the former Schering AG and then Bayer HealthCare.

JM Chairman Patrick Thomas said: “Robert has devoted a large part of his career to leading JM, and the Board and I would like to express our sincere gratitude for what he has achieved. Under his leadership the company has evolved significantly, and we wish him every success in the next stage of his career.”

“After a rigorous and wide-ranging selection process, the Board is delighted to appoint Liam to the role. He is a dynamic and values-driven leader with an impressive track record of leading science-based businesses while delivering consistent high-quality performance. He balances commercial ability with a strong strategic perspective.  He has a proven track record of driving growth as well as modernising organisations whilst retaining a strong external engagement with stakeholders, regulators, and government.  His capabilities will be key for JM as we continue to scale our attractive high growth businesses to address climate change challenges, while investing in the opportunities for the future. The Board warmly welcomes Liam to the role and wishes him every success.”

Robert MacLeod said: “After nearly eight years as Chief Executive, the time is right for me to move on. It has been the greatest privilege of my career to be part of the Johnson Matthey team and to work with so many wonderful colleagues.  JM is more relevant than it has ever been through its consistent focus on developing innovative, science based, sustainable technologies.  I am confident in our future growth prospects and the significant benefits our technologies will bring.”

Liam Condon said: “Johnson Matthey is an incredibly innovative company focused on using science to address the challenges of the 21st century. Living within our planetary boundaries requires an acceleration of decarbonisation and Johnson Matthey has the technology and people to be at the forefront of this massive societal transition. I am really excited to join Johnson Matthey and work with our team on accelerating growth and value creation as we push forward towards a more sustainable future.” 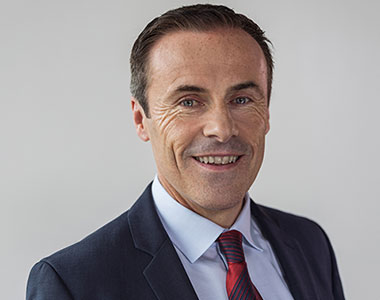 Liam Condon has been a member of the Board of Management of Bayer AG and President Crop Science Division, headquartered in Monheim, Germany, since 1st January 2016 and was first appointed as Chairman and CEO of Bayer Crop Science in 2012. He is also responsible for the regions Latin America and Africa for the Bayer Group.

Liam was born in Dublin, Ireland, in February 1968. He studied international marketing and languages at Dublin City University and at the Technical University of Berlin. As well as English and German, he also speaks Gaelic, French, Japanese and Mandarin (Chinese).

After graduating, Liam joined the former Schering AG and held various sales and marketing positions in the pharmaceutical business in Germany. He then served five years as head of a business unit in Osaka, Japan. On his return to Germany, Liam became Regional Marketing and Medical Director for the Asia-Pacific and Middle East regions at Schering in Berlin. In February 2005, he was appointed Managing Director of Schering in China.

Following Bayer’s acquisition of Schering in 2006, Liam was appointed Managing Director of Bayer HealthCare and General Manager of Bayer Pharma in China. In January 2010, he was appointed Managing Director of Bayer HealthCare in Germany and country representative for Bayer Schering Pharma in Germany. From 1st December 2012, until his appointment to the Board of Management of Bayer AG, Liam was Chairman of the Bayer CropScience Executive Committee.

Liam has been a member of the Governor’s Panel for Consumer Industries at the World Economic Forum since 2016 and also served for 4 years until October 2021 as the Chairman of the Board of Directors of CropLife International, the R&D based agricultural industry association.

Liam Condon is married and has two sons. He holds both Irish and German citizenship.

As Chief Executive Liam Condon will be paid in accordance with Johnson Matthey’s Remuneration Policy. His overall remuneration package will be similar to his remuneration at Bayer. Full details will be set out in the 2021 Directors’ Remuneration Report (published in June 2022) with the key elements of his remuneration being an annual salary of £950,000; a pension cash allowance of 15% of salary, which is in line with the wider workforce in the UK; plus other benefits and international relocation support in line with our Remuneration Policy. Liam will be eligible to participate in the Annual Incentive (Bonus) Plan with a target opportunity of 90% of salary (maximum 180% of salary), with 50% of any bonus payable deferred in shares for a period of 3-years. He will also be eligible to participate in the Performance Share Plan (PSP) with an annual award of 250% of salary. All awards in the PSP are subject to a 3-year performance period with a further 2-year holding period. Liam’s PSP award for the 2021/22 financial year will be pro-rated to reflect the timing of his appointment.

There is no buyout or compensation provided in connection with Liam’s move from Bayer to Johnson Matthey. Upon joining Johnson Matthey in March Liam will begin purchasing JM stock to build up his shareholding in the Company.

There are no other disclosures required pursuant to Rule 9.6.13R of the Listing Rules of the Financial Conduct Authority.


The person responsible for the release of this announcement is Nick Cooper, General Counsel and Company Secretary of Johnson Matthey Plc.

Johnson Matthey hosted a call for investors and analysts at 08:00 GMT, with Robert MacLeod, Chief Executive and Stephen Oxley, Chief Financial Officer. Visit the event webpage to listen to the recording.